Table of Contents: Language of Mathematics and Math in Real Life
Posted by chycho at 12:15 PM No comments:

Infinity, Part 1 to 3: Until the End of Time and the Universe Explodes; Limits and Asymptotes, Visualizing Infinity; Going Halfway, Travelling from A to B Forever (The Language of Mathematics, Series IVb, #154 to #156) - UPDATE 2

As a follow-up to one of the first videos that I produced for The Language of Mathematics, the 2007 teaser video regarding Zero and Infinity, below you will find three additional videos discussing the concept of infinity in more detail. The original teaser video is also embedded.

My Two Infinities, Part 1: Until the End of Time and the Universe Explodes (Language of Math #154)

My Two Infinities, Part 2: Limits and Asymptotes, Visualizing Infinity on a Graph (Language of Math #155)

My Two Infinities, Part 3: Going Halfway, Travelling from A to B until Reaching the Planck Length (Language of Math #156)

The Language of Mathematics (5): Zero and Infinity

Posted by chycho at 7:49 AM No comments:

The Beauty of Dice, Part 1: Probability Distribution for the Sum of Two 6-sided Die (Math in Real Life)

Table of Contents: Language of Mathematics, Math in Real Life
Posted by chycho at 7:08 AM No comments:

A Blast from the Past: The Language of Mathematics on Google Maps Street View

Winter is nearly at an end, spring is in the air, and it’s almost time to do some math. I’ve been gearing up to start producing another full season of math videos for The Language of Mathematics and Math in Real Life. There is a lot planned for 2014 so it should be a nice full year of some math goodness.

Once the weather warms up and the consecutive days of rain cease, we’ll be heading out with the camcorder and the tripod to find some nice walls where we can continue working on Series IV as well as producing some videos on a few random and not-so-random topics. A lot more on that later. For now, I’d like to share a little blast from the past.

A few weeks ago, while a friend was surfing Street View of Vancouver on Google Maps she came across one of my favorite walls in the city, and it so happens to have captured one of my handiworks from the math videos.

The site has some sentimental value for me. It’s the first wall I used when I began this project back in 2007, and shows the location of the first math video I loaded on YouTube. For those that have been around long enough, if you recall, it was the wall that I used to create the videos where we discussed the Real Number Set (Part 1 and Part 2) in Series I.

The image that my friend found shows my handiwork from Series IVa on the wall. It’s from the video where we discussed systems, SI units, and where we created a conversion table for colored squares and triangles. You’ll find the video we created below, and if you are so inclined, you can use Google’s Street View to check out the area further if you want to have a feel for why this wall is the only location that I have come back to for every series since starting this project - a wall that we will most likely visit for many years to come.


As for the rest of the videos that were produced in this area, you will find them below. For multi-part sets, the links are provided below the videos that have been embedded. I hope you enjoy watching them as much as I enjoyed creating them. Peace.


2008: Series II - Language of Mathematics II (42): Exponents and Radicals (1 of 3)
Part 2 and Part 3. I also put together a set of these videos linking the concept of exponents and radicals with the real number set: Part 1 and Part 2


2010: Series IIIb - Why Do We Factor? Introduction to Factoring Polynomials: The Language of Mathematics IIIb (105)
Posted by chycho at 7:44 AM No comments:

An Exercise for the Mind: a 10 by 10 Math Puzzle: a Pattern Recognition Game: Meditation on an Open Maze

A few years ago one of my students introduced me to a simple and intriguing game. He didn’t know where the game originated from but said that it was popular in Turkey, and that he and his friends loved playing it.

It is probably best categorised as a mathematical puzzle that requires no arithmetic calculations, just placements of numbers based on two rules; hence I prefer to refer to this puzzle as a pattern recognition game, or simply, an exercise for the mind using an open maze – a meditation of sorts.

The Purpose of the Game

To take a 10 by 10 grid, equaling 100 squares, and completely filling in every square based on two types of movements.


The Rules are Simple 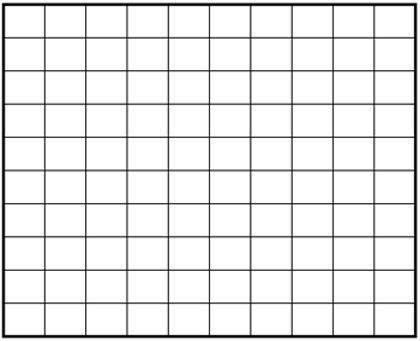 2) Fill one of the squares with the number 1, then, based on the following two movement types, use consecutive numbers to fill in the rest of the grid:


Movement Type I: If the next number in the sequence is going to be placed vertically or horizontally, then it must be placed exactly three squares away from the previous number - there must be a two square gap between the numbers.

Movement Type II: If the next number in the sequence is going to be placed diagonally, then it must be placed exactly two squares away from the previous number - there must be a one square gap between the numbers. 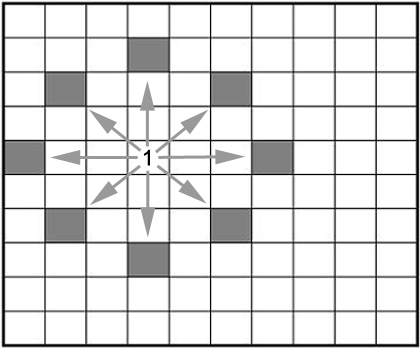 3) Numbers can only be placed in empty squares - once a square has been used it can not be used again. All placements must occur within the grid.


4) Game is complete when the number 100 is reached - when all empty squares in the grid are filled. If you cannot continue placing numbers based on the two movement types above, and empty squares remain in the grid, then the puzzle is not complete and the game lost.


Two Incomplete Examples and a Solution

Example 1: The first example is one where I tried to get the worst possible result. I was able to end the game in 6 moves. 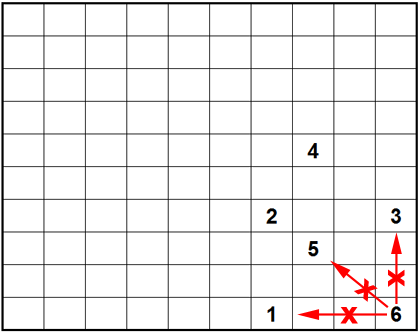 Example 2: The second example is my best result so far. In this example I was able to reach 99 – one move short of finishing the game. 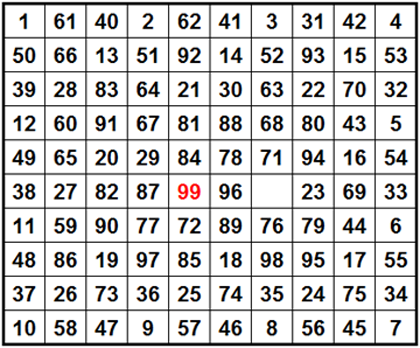 A Solution: The final example is a solution completed by my student who introduced me to the game. He had been playing this game for approximately three years, and this was the only solution that he had been able to obtain during this period. This means that we know there will be at least four solutions to this game – the one presented below and its three mirrors. It would be interesting to find out how many solutions actually do exist - any mathematicians or programmers out there interested in tackling this problem? 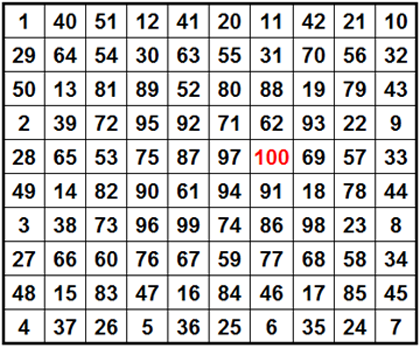 Aside from creating a weighted scoring system or using symbols instead of numbers to fill in the squares, two variants could be: 1) give a starting point and an end point for the game – this will dramatically increase the difficulty of the puzzle; 2) create different types of grids but maintain the same placement rules – an example is presented below. 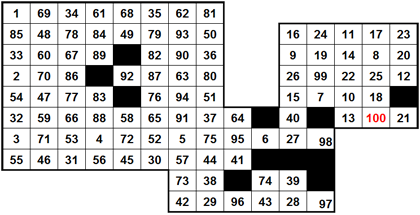 For anyone who wants to try this out, below you will find a sheet with 12 grids (click to enlarge). Ideally, a simple program based on the parameters above loaded on a device with a touchscreen would be the best way to play this game. If you are into such things, I hope the game entertains you, and if you find anymore solutions, please send them my way. Thanks in advance. Posted by chycho at 8:14 AM No comments:

Index and Table of Contents

Open all | Close all

NOTE: If you do not see the Tree Menu above, please use Mozilla Firefox to access it.